Can I autoplay audio?

Types of audio in Scenario

How to direct audio within the 3D environment

How to direct audio through ChatMapper

How to Make Actors using the Same Voice Sound Different

Exporting a screenplay for voice actors

Adding audio files to the experience

If fixing this doesn’t solve the issue, please refer to other tips in the FAQs document.

Can I autoplay audio?

Yes, see the Autoplay section below.

Types of audio in Scenario

There are 3 different types of audio elements in scenario:

How to direct audio within the 3D environment

Text-to-speech within the 3D environment can be triggered using the conversation editor (see “How do I… → Add a conversation to a bot?”

Sound effects can be played through the playSFX action. As an example, we will trigger a sound when a certain object is clicked; to do so:

It is possible to play ambient audio with the playAmbient action. To do so:

That’s it! Note that adding this to the onstart field will play the ambient music automatically; if you only want to start it on command, you can add it to the onclick field instead. Additionally, it’s recommended to keep the volume of this music fairly low, as it can otherwise interfere with other activities such as conferencing or dialogue with bots.

How to direct audio through ChatMapper

The dialog text is played using ResponsiveVoice. The voice can be set up for the avatar using the CAF Voice.

How to Make Actors using the Same Voice Sound Different

This is especially useful if you have two actors using the same Voice and you want them each to sound unique. By playing with pitch and rate values you can create individual voice variations off the default.

It is possible to have one actor speak multiple languages. Typically, an Actor’s voice is set in the Assets panel, by changing the “Voice” property (for instance to “UK English Female”).

It is however also possible to change the voice in a dialogue node. To do this you will need to add the custom asset field (CAF) via Project > Project Settings > Custom Asset Fields > Dialogue Nodes > Add New Field (button near the bottom) with 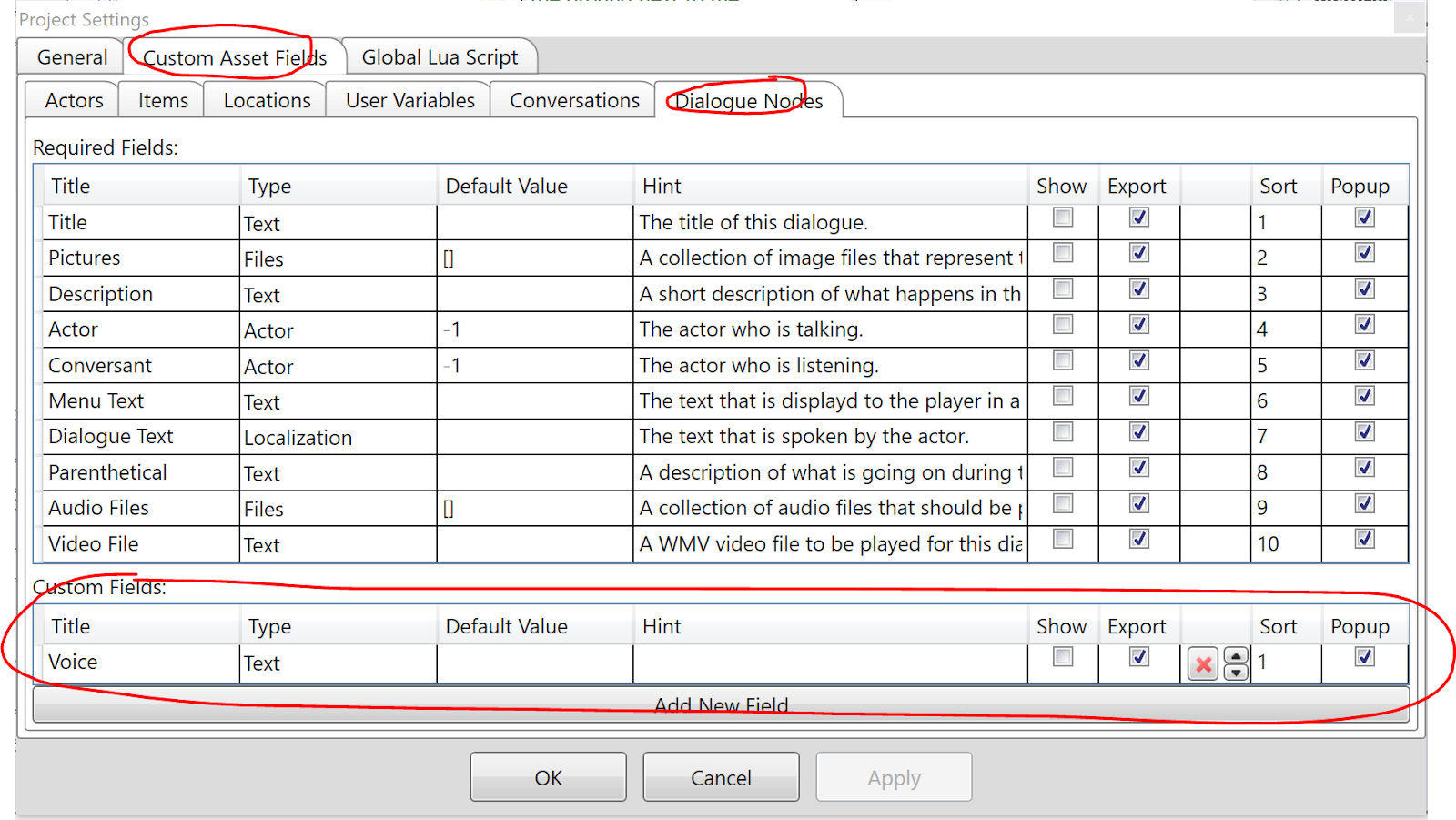 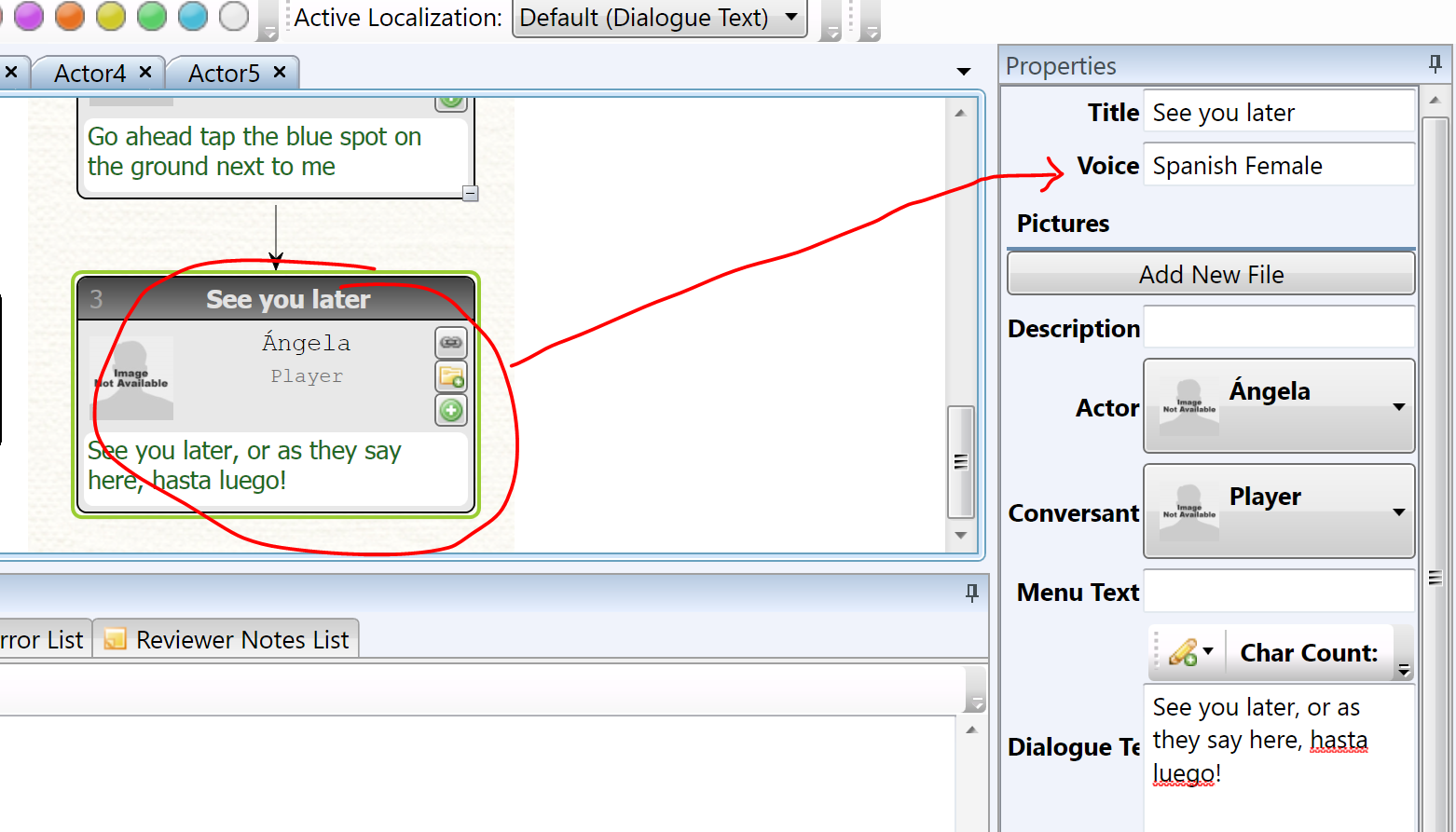 Be aware that not all voices/languages are available in both male and female versions. Check the list in the widget on https://responsivevoice.com

A player’s voice is based on their chosen avatar gender, by default UK English Female and UK English Male. You can choose different default male and female voices in the Dashboard Space settings. You may also override the player Voice in ChatMapper.

Conversations can be added to 3D items in a space. The default voice is UK English Male.

The speaking character is "Narrator". Normally to change their voice you'd use ChatMapper, but using the built in Conversation Editor you can add two nodes (one before and one after the sentence) to edit the Narrator's voice for example to be US English Female.

To apply this for to a 3D Item, you should:

If you wish to reset the Narrator's voice afterwards, you can do the same and place another script node after the spoken sentence; the script in this second case should be LB.cmPlayer.ds.actors.Narrator.Voice="UK English Male"

You can create scenarios and translate them into multiple languages. Allowing a user to plan a scenario in their chosen language.

To add multiple languages, 2 new CAFs need to be added to the project for each language.

Then we set Voice_es to the corresponding voice, for example “Spanish Female”. And we use the field “es” to add the text we want the avatar to speak when the spanish localization is selected.

For French, the fields would be called fr and Voice_fr.

The platform also supports the use of audio files instead of text-to-speech, which allows employing voice actors for the highest quality delivery. As recorded audio cannot be easily changed, it is recommended to finalize the script with TTS first, and only then to record audio.

Exporting a screenplay for voice actors

Exporting a screenplay works like other exports, by clicking on File > Export > Screenplay as RTF.

Note that the screenplay IDs will not be the same as IDs of ChatMapper nodes: a section at the end of the screenplay called “Dialogue ID Conversions” contains all mappings, for example  [3] => 6  means recording [3] is associated with node 6.

This is done because otherwise any changes in ChatMapper structure might completely change the references in the screenplay as well (even if, for instance, you added an empty node), which in turn would make it nearly impossible to keep a consistent set of references for audio files.

Adding audio files to the experience

To add a file, click on Add New File under the “Audio files” header. An input field will appear, and the file path can be written within. Alternatively (and more easily), an audio file can be added by clicking on the button with three dots, which will open the system’s default file selector. 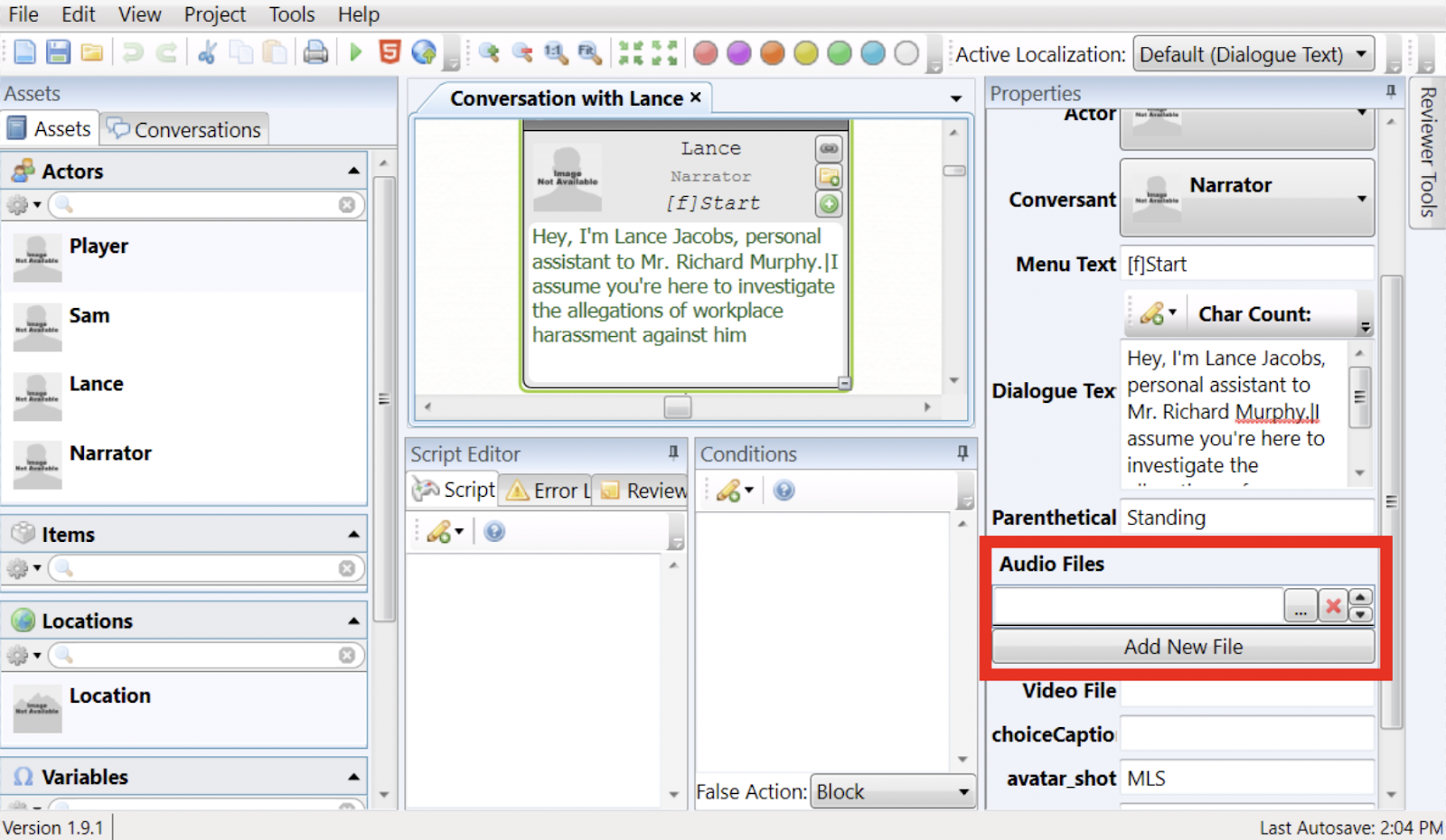 If the node has multiple sentences (Separated using  the pipe symbol ‘|’), one file must be added for each sentence (don’t worry about adding them in the correct order – that can be changed from within ChatMapper by using the small arrows on the right of the file path). Here is the same node as before, with a couple of files added 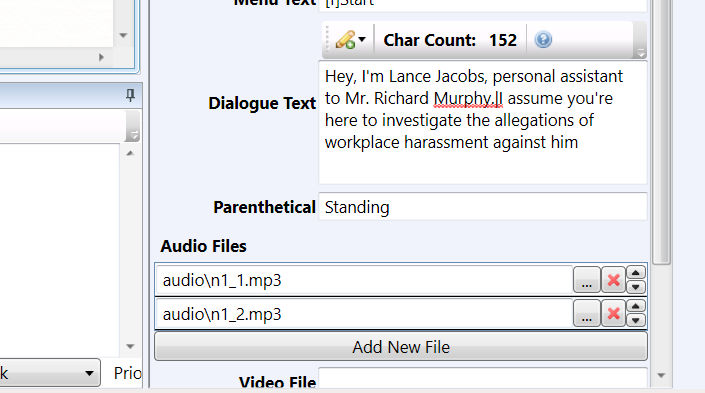 In this case we need to do something similar to the previously mentioned method. We assume the conversation has the CAF named after the language (for Spanish we need to add the CAF of type Localization named “es” to the dialogue node).

We also assume the voiceovers are already configured in the nodes for our main language, using the `audio files` field.

Since we are adding the spanish language (named “es”), we need to add a new CAF of type Files called audio_speech_es to the dialogue node. Then we add the corresponding voiceover audio files matching what we already did for our main language.

For this to work, the male and female audio files will need to have the same name (and must therefore be placed in different folders). For example:

To explain in another way, here is how the platform thinks about audio_speech_urlPrefix: 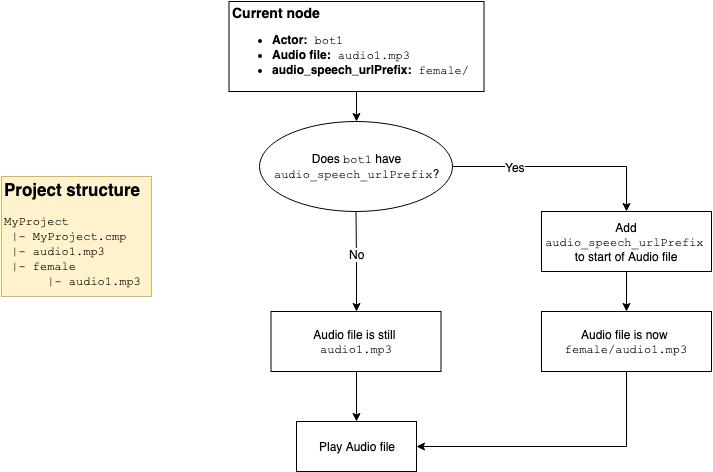 To automatically switch between the two values, you can add a small script to the beginning of your conversation, and change the first two variables.

So for example, if you have the same structure as in the flowchart (with female audio being in the female/ subfolder) you would add this snippet:

As a final example, let’s organize the files in two different folders:

Let’s say this time it’s the files in VO_f that were added to the dialogue nodes' Audio Files; to get the male version, we would then set audio_speech_urlPrefix to "../VO_m/".

"../" is a special value that signifies going one folder "up", which in this case means the following will take place:

Ambient audio effects can be added to any element such as a location (may not be working), conversation, actor or dialogue node.

They are added by using a new CAF of type File named audio_ambient in the element. 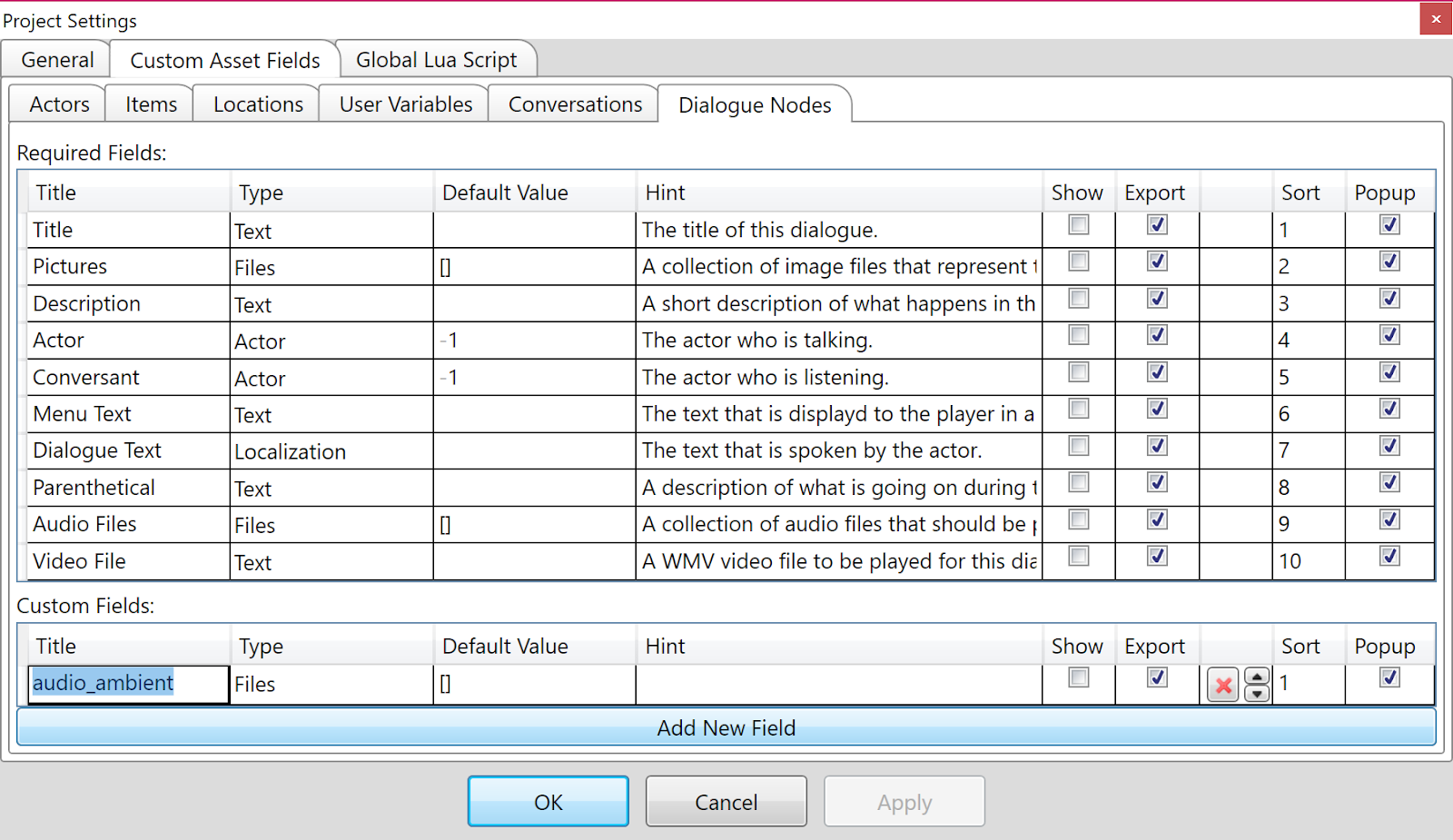 Once the CAF is added the field will appear in the ChatMapper Properties panel.

Note that the CAF name appears as audioambient (without the underscore) instead of audio_ambient, this is only a cosmetic issue. 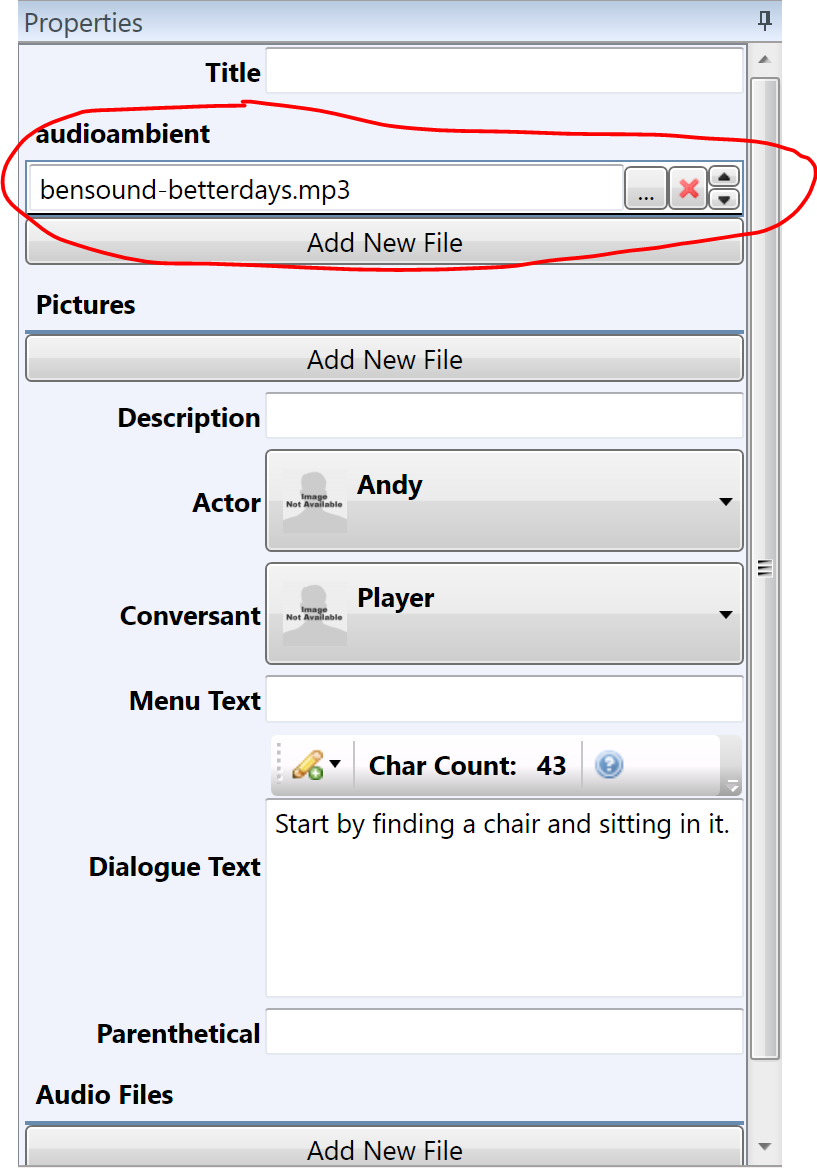 Click the […] button to select an audio file (typically a .mp3)

To ensure the audio files are included online in the Scenario, be sure to export and upload as ChatMapper Project (.cmpkg) (not .json)

The ambient audio will begin playing when the element is encountered and will continue looping infinitely. When triggering an ambient sound, any currently playing ambient sound will stop and the newly triggered one will play.

You can adjust the volume of the ambient audio through script, volume has a range from 0 to 10.

Browsers restrict autoplay of any audio source unless the user interacted with the page in some way first, e.g. with a click or tap.

From version 2.14 onward, if playback fails because the user has not interacted with the page a popup will be shown with a “start” button. The videos will start playing as soon as the user interacts with the page, whether they clicked on the button or dismissed it.

On versions 2.13 and earlier, autoplay of audio is not possible.