Adding Tasks to an Existing World or Space (aka a Property)

Using Trophio in a Space

Using Trophio in the conversation editor

Example: using Trophio to show a dialogue node only once

I have created a task in a space, but it’s not showing up when accessing that space as part of a world!

How can I make a task only complete once a certain object has been collected?

How can I make a task appear as a progress bar in the achievements menu?

How can I allow a user to complete a task in any space within a world?

Trophio is a service that allows for seamless integration of gamification tasks into the Hyperspace Metaverse Platform.

Trophio is also compatible with SCORM and LTI.

Adding Tasks to an Existing World or Space (aka a Property) 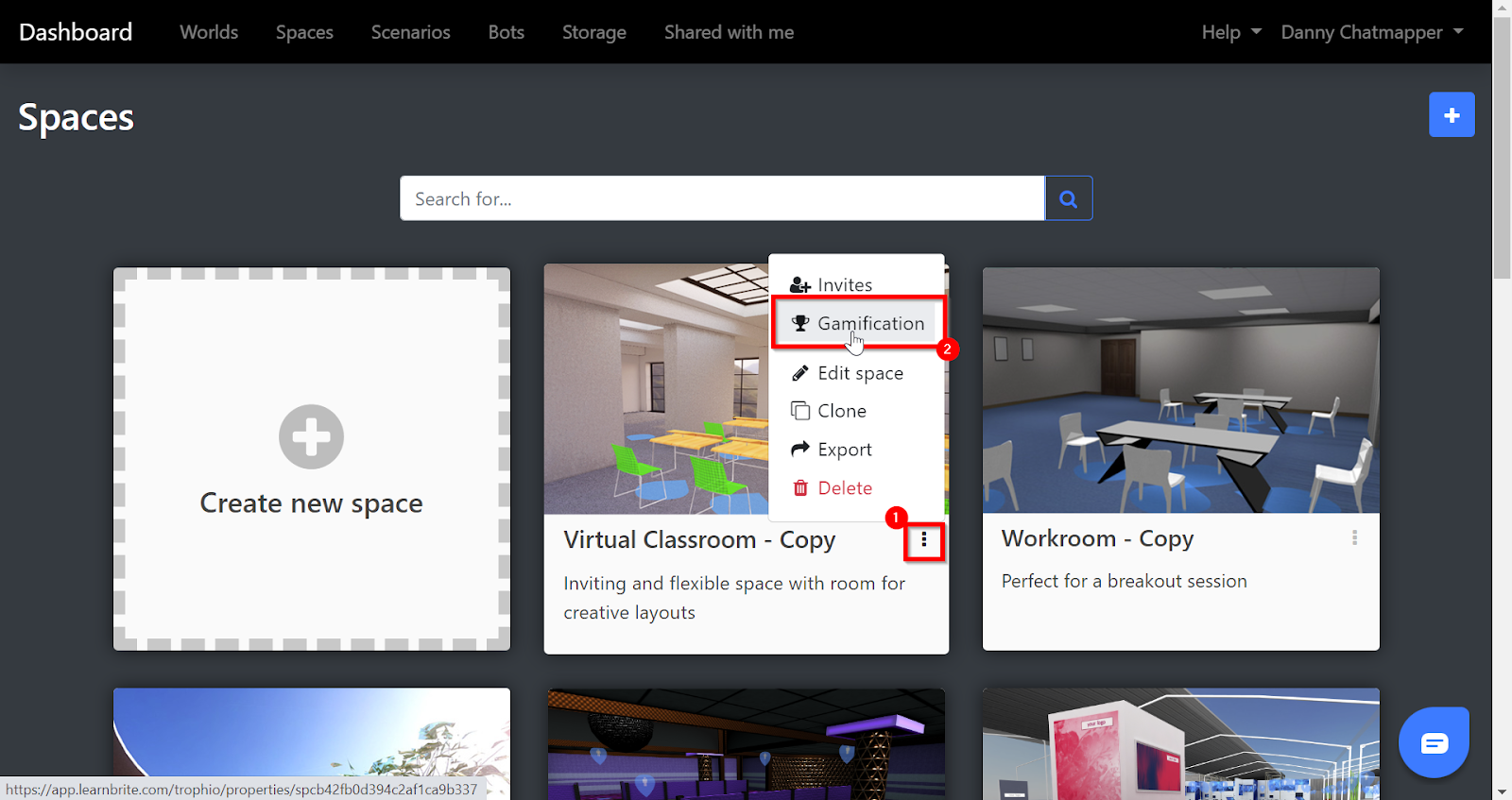 By default, Trophio will query Dashboard to get a list of the logged in user’s properties (the spaces and worlds they own). This list can be accessed here: https://app.learnbrite.com/trophio

To create a task, navigate to the property in which the task should be created and click on "+Add task" button on the right.

A form with several sections will appear. 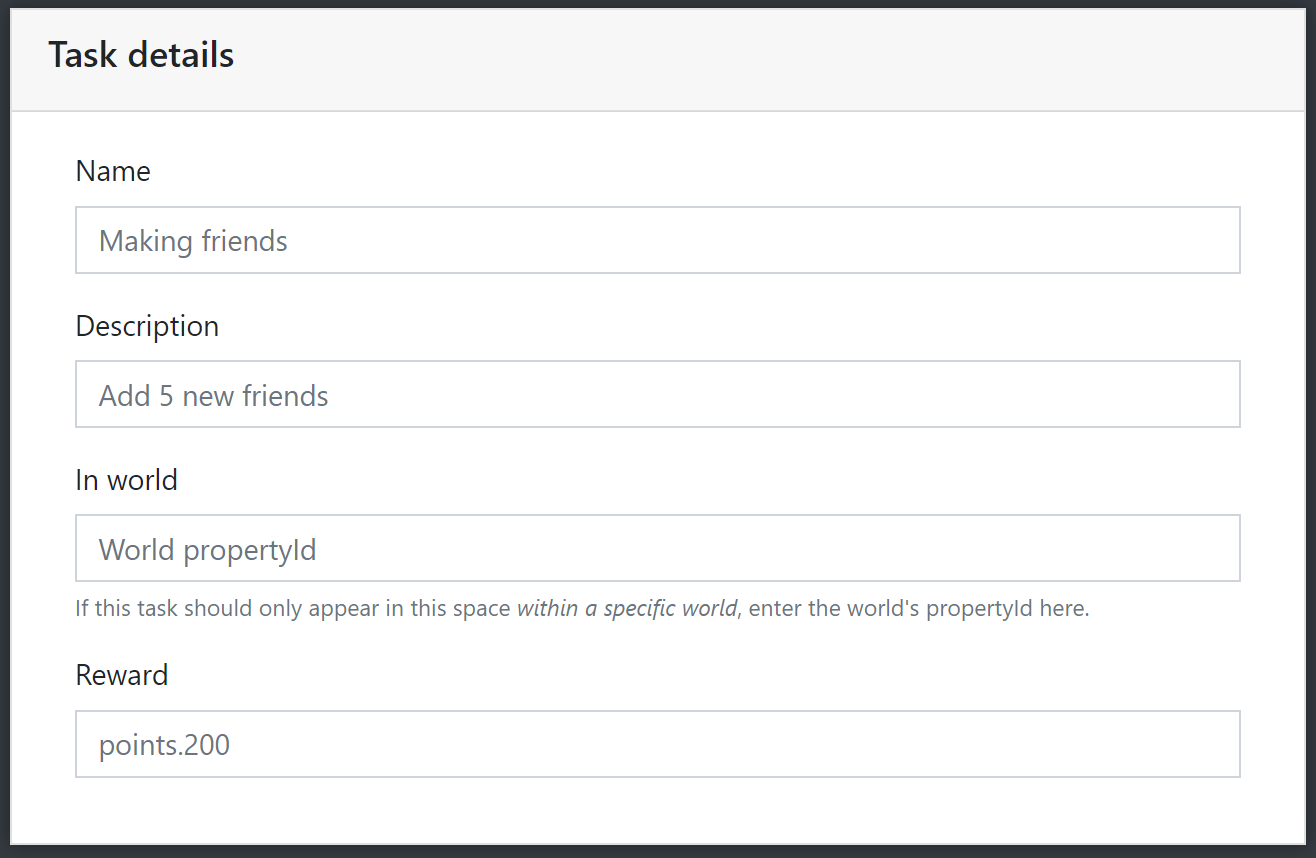 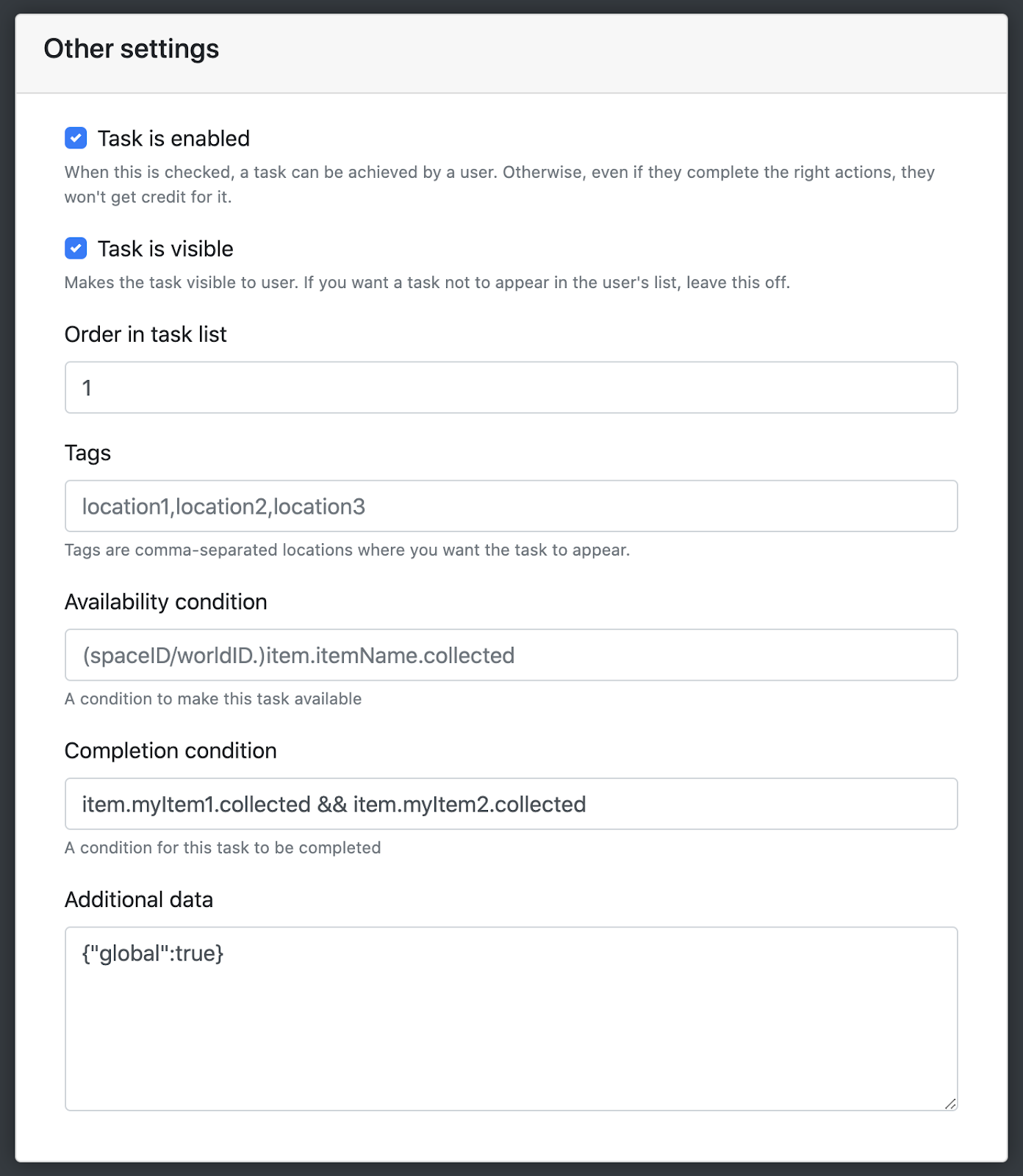 It is possible to set conditions to either mark the task as available (i.e. "completable", for instance only unlocking a certain task once a set of "hint" items has been collected) or to complete it outright (for example completing a "Puzzle" task once all puzzle pieces have been found).

Conditions can be set in the task’s details, visible when first creating the task or when editing it.

A condition is made of four parts

Let’s demonstrate with two examples, one omitting the propertyID and the other including it.

A condition can be negated by adding an exclamation mark before it. In the example below, the condition will evaluate to "true" only if fakeGear has not been collected

It is possible to chain multiple conditions together:

In the following example, the condition will be true if either the task "hints-hunt" has been completed, or if the item "passKey" has been collected in a certain space.

Now let’s check the implementation of a potential "collection"-type task, to complete which we must collect three different items anywhere within a world.

A number of reports are available to extract useful information from the raw data collected by Trophio. Note that the Collected items report relies on some custom configuration that cannot currently be set by normal users (all relevant information will appear in the Full report, however).

A complete report of the achievements of all users (the status and how many times they completed each).

A report detailing the analytics data of each user. What follows is a list of potential columns (some will be shown/hidden depending on available data).

The number of rows in the analytics table. Note that if guest access is allowed, a person loading the space/world on two different browsers will create two guest accounts (reloading on the same browser will not create a new guest). Provided these users set their name when reloading, you will be able to identify duplicate users by ordering the table with the "email" or "name" columns.

Normally containing the user’s If the user fills in their profile information, that is what will appear here (also applies for guest users, which are normally completely anonymous).

The number of contacts of this user. This includes the contacts a user added, as well as the users that added the user as a contact.

The number of times a world was visited, and the number of seconds the user cumulatively spent in the world.

Number of chat messages sent by the user in a space. A cumulative value is provided when looking at the analytics of a world.

The amount of private messages sent by the user.

The number of announcements sent by the user (note that announcements are only available to Presenters and Editors, see the "User Roles" guide)

How many times a user has joined a conference call while in the world (does not take dial-in into account, as dial-in users are not part of analytics)

Number of questions the user asked (and answered) within the Q&A functionality.

If the option to "track interactions" has been turned on for a 3D object, the number of those interactions will be shown as a column in the report.

A report that allows seeing both the detailed data about item collection, and graphs examining the ratio of correct/wrong/missed answers on "answerable" items (both by item and by user), along with the collection ratio of "collectible" items.

This report allows seeing the duration of each user’s conference call within a space within a certain timeframe. This does not currently include audio zones. 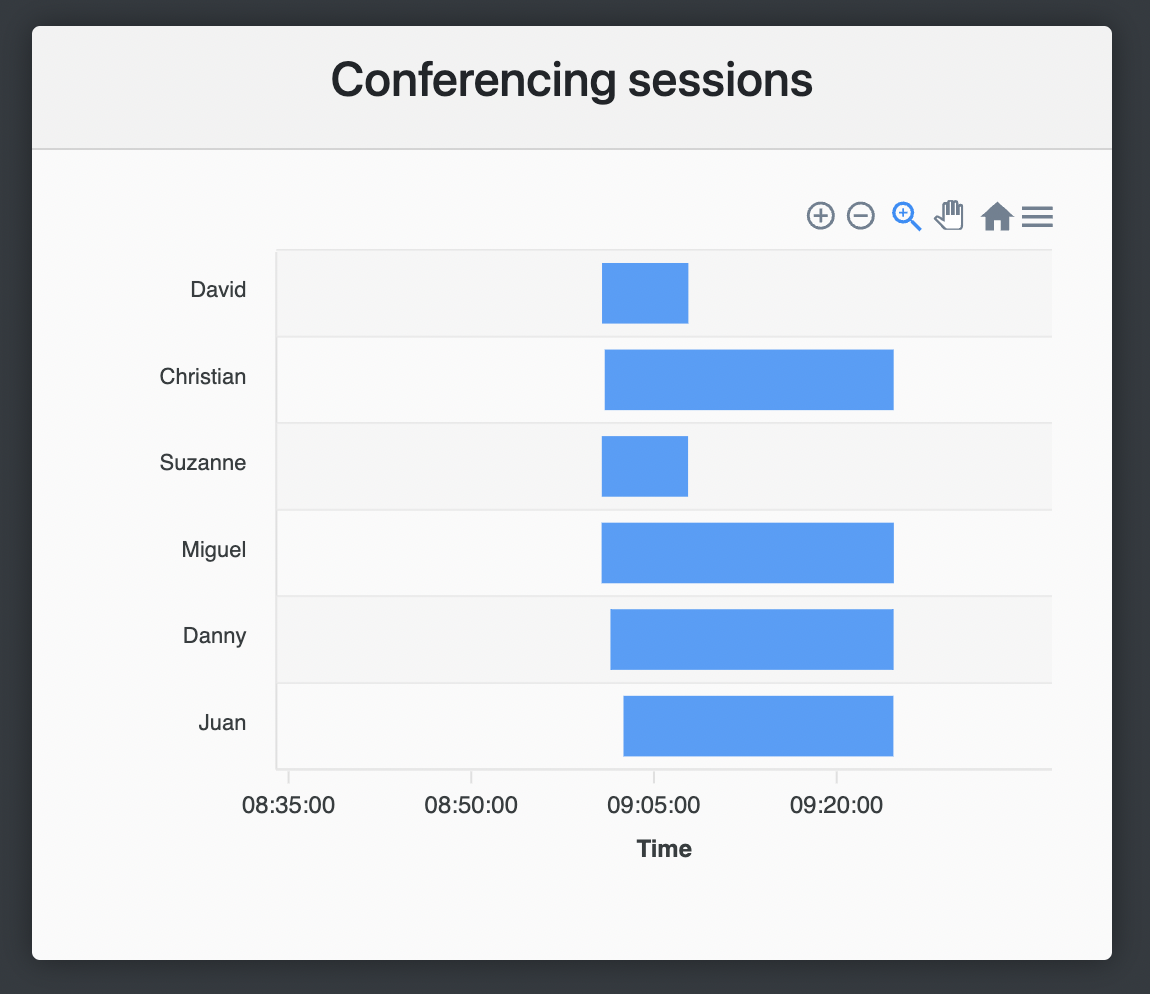 Using Trophio in a Space

Using Trophio in the conversation editor

It is possible to add conversations directly from the space, using the conversation editor. This also allows to trigger gamification updates (such as starting or completing a task, or collecting an item) at any point in the conversation.

To enter the conversation editor, enter "Edit mode" and choose the desired bot to add a gamification task to.

Hovering over a bot’s feet (or tapping on them) will show a blue or gray wireframe box with three icons. To open the conversation editor, click or tap the middle one (with a speech bubble icon).

To add Trophio tasks, click on "More": the conversation editor will pop up. It is a script that allows speech and conversations to be added to bots in a space. 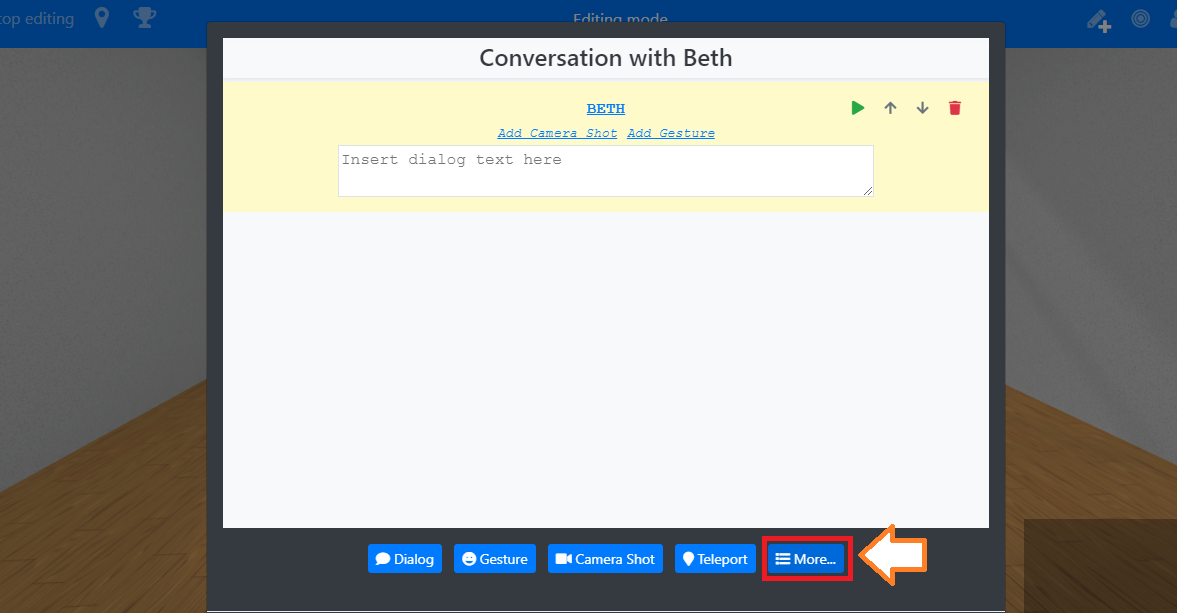 This will show all actions that can be added through the conversation editor. In the bottom right corner there is a "Gamification" section. 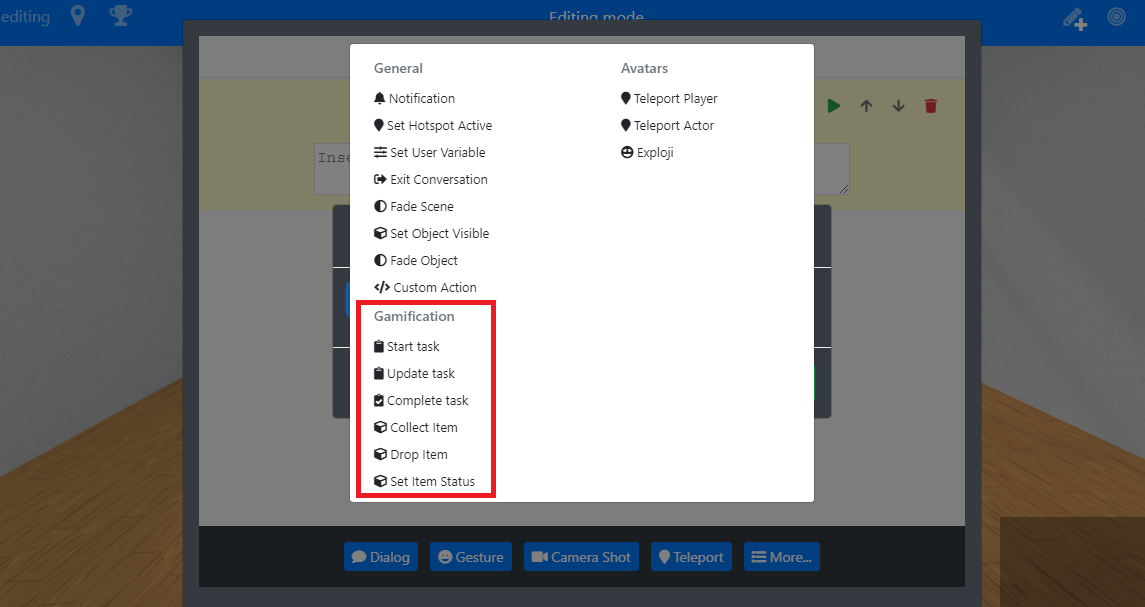 By clicking on any of them, a small popup will appear to fill in some detail (in the example, "Start task" was chosen). 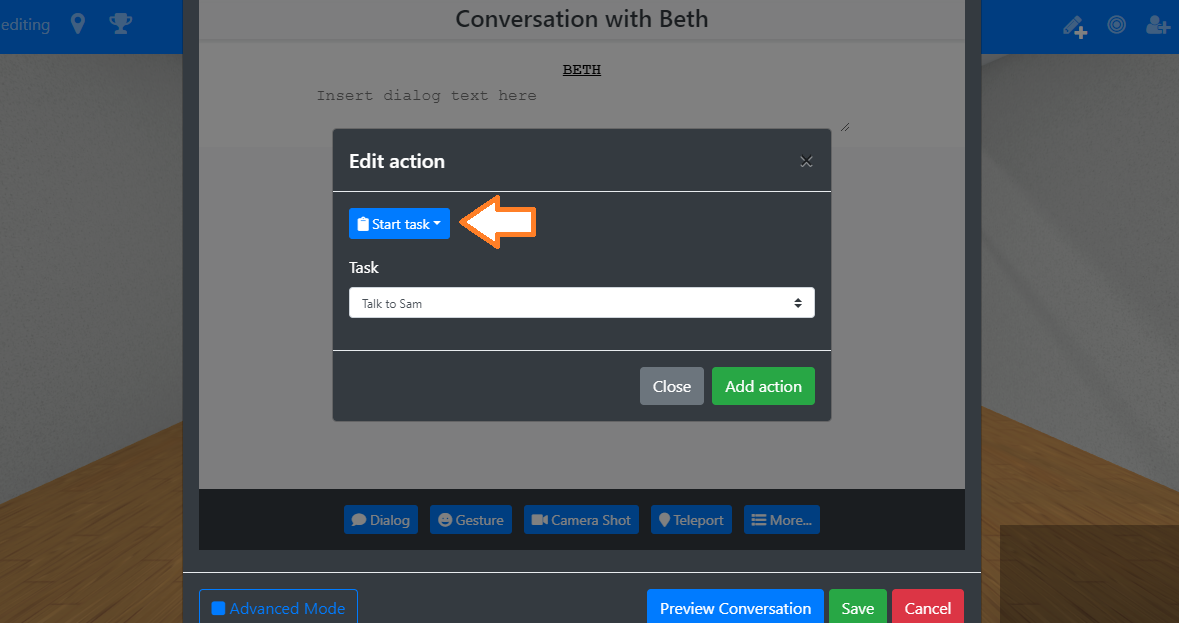 The gamification task used referenced in the action (which will be set to "started" in this case) can be selected in the "Task" dropdown, from the list of available ones. After choosing a task, this action can be saved by clicking on the green "Add action" button.

Note: If no tasks appear in the dropdown, check that they were added in Trophio first. If they were, try reloading the Space or World. Any tasks added to Trophio after a space has loaded will only display once the space is reloaded. 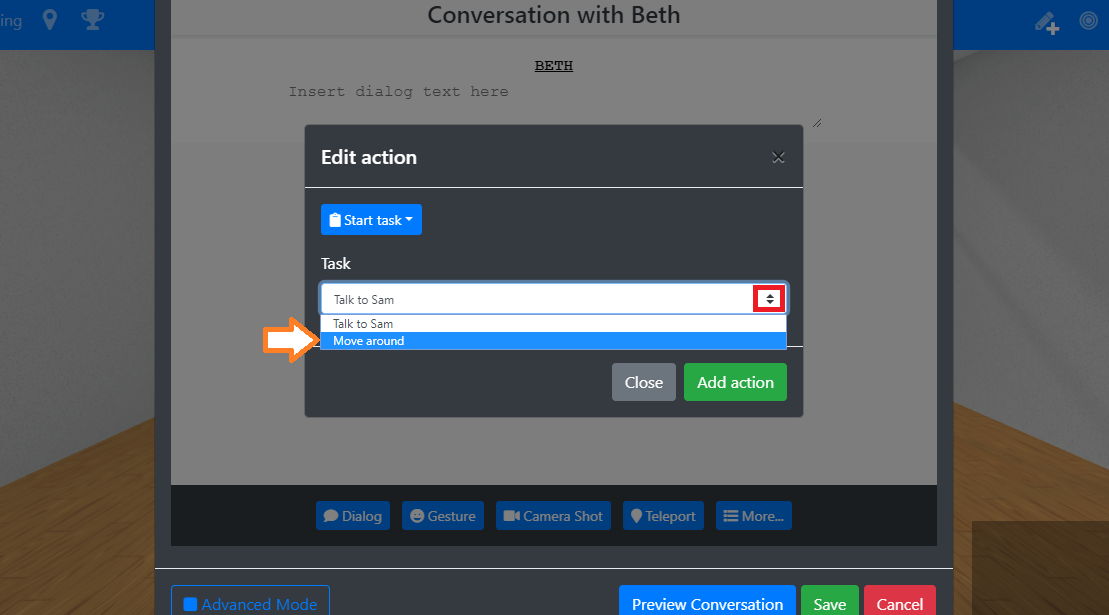 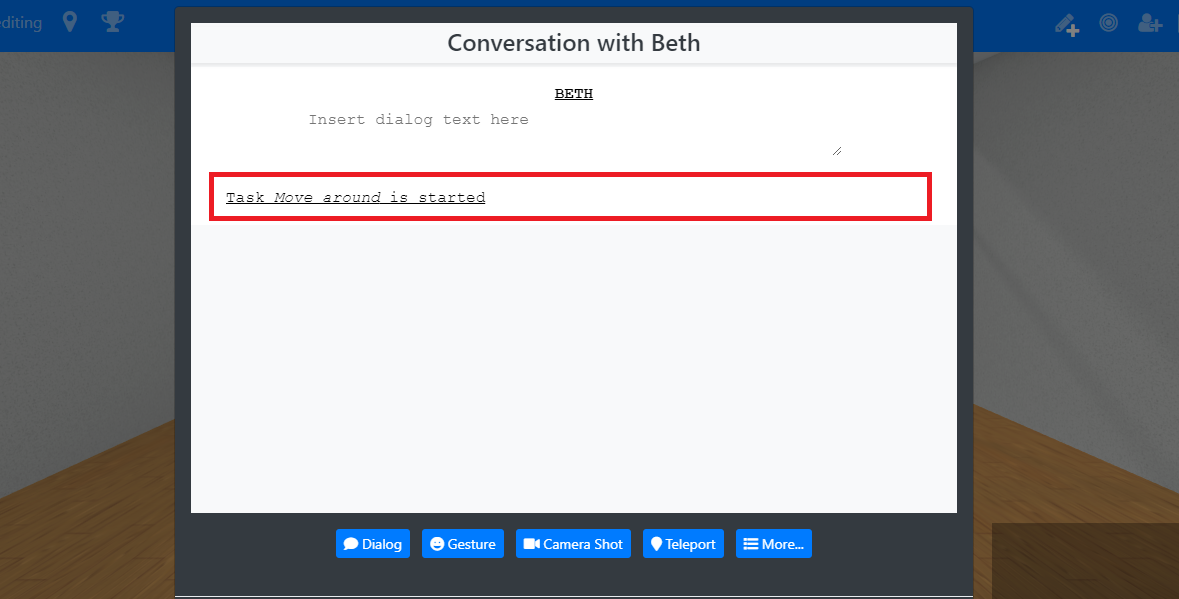 It is also possible to add trophio tasks as onclick actions to objects.

Instead of clicking on the speech bubble like in the previous section, the cog icon should be clicked instead. A popup will appear 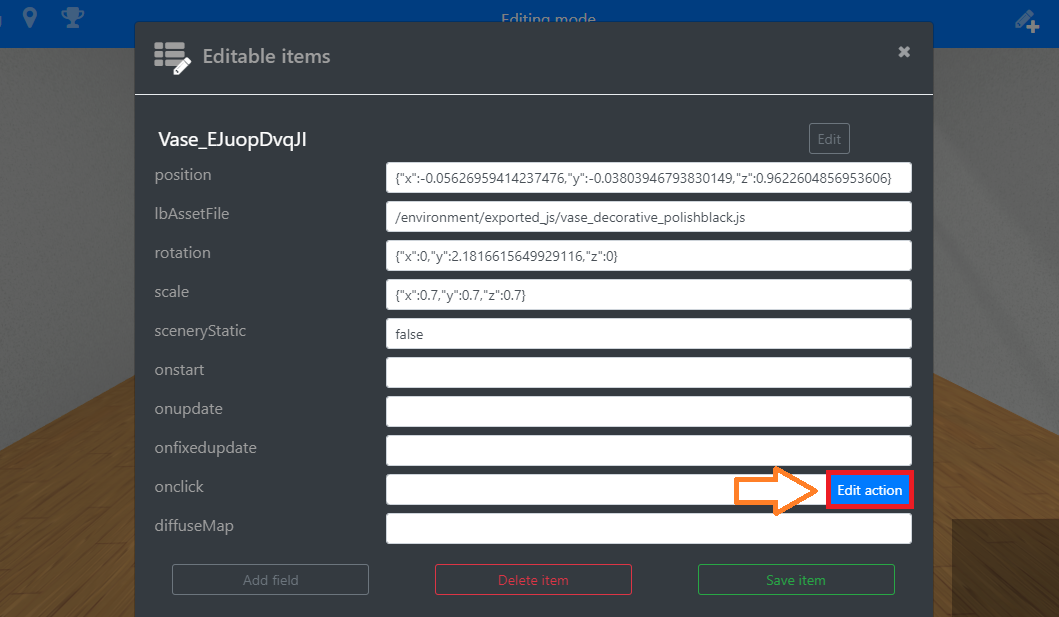 In the "onclick" field, click on the "Edit action" button. This will open the conversation editor for this object. Notice that the example is titled "Conversation with Player" and therefore it will also include actions related to the player (or user). From here, the steps detailed in the previous section can be followed.

For any of these, "task" can be either the task’s shortcode or the propertyId, and "item" is the item’s name.

Example: using Trophio to show a dialogue node only once

With ChatMapper, it’s possible to only show a certain dialogue node once (for example a "Start" node at the beginning of a bot interaction, see ChatMapper Cookbook → Only showing the Start node the first time). This approach has a big limitation, however, in that if the user reloads the entire conversation state resets, which in many cases is not ideal.

That restriction can be lifted using Trophio, by saving a certain step the user took as an item, which will then be loaded every time a certain space/world is opened.

The first step is to select the node(s) which shouldn’t repeat. In our example we will use a "Start" node which we only want to show once. 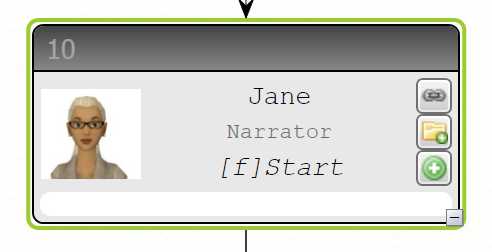 If the "displayed" state of this node were stored in a ChatMapper variable, we would add a script to this node like the following:

And also add a condition to the same node checking for the variable we previously set, so that the node wouldn’t play if the conversation was triggered again.

With Trophio, the principle is the same:

1. Collect an item with a specific name when first going through our dialogue node

2. In the same node, check whether the item was or wasn’t collected as a condition

To report the user’s score in the LMS, first make sure that the combined task rewards (e.g. "points.200") do not exceed the maximum score for the LMS module. Submitting the user’s result to the LMS consists of first obtaining the user’s current score, and then posting it to the LMS, like so:

A task created in a space will be available only in that space, whereas a task created for a world will be visible in all spaces within that world.

I have created a task in a space, but it’s not showing up when accessing that space as part of a world!

Tasks created in a space will not be visible when accessing that space as part of a world. In order to make them so, you should fill the "In world" field of the task with the world’s ID.

How can I make a task only complete once a certain object has been collected?

In order to do this, you need to fill in the "Completion condition" field of the task. Instructions on its formatting can be found in the "Using conditions" section below.

How can I make a task appear as a progress bar in the achievements menu?

There are two requirements for this:

How can I allow a user to complete a task in any space within a world?

Certain tasks (e.g. collections of items), due to their non-linear nature, could be completed in any space within a world. In order to allow these tasks to be completed no matter in which space the user is, create a task for the world and set its "Additional data" field to the following: