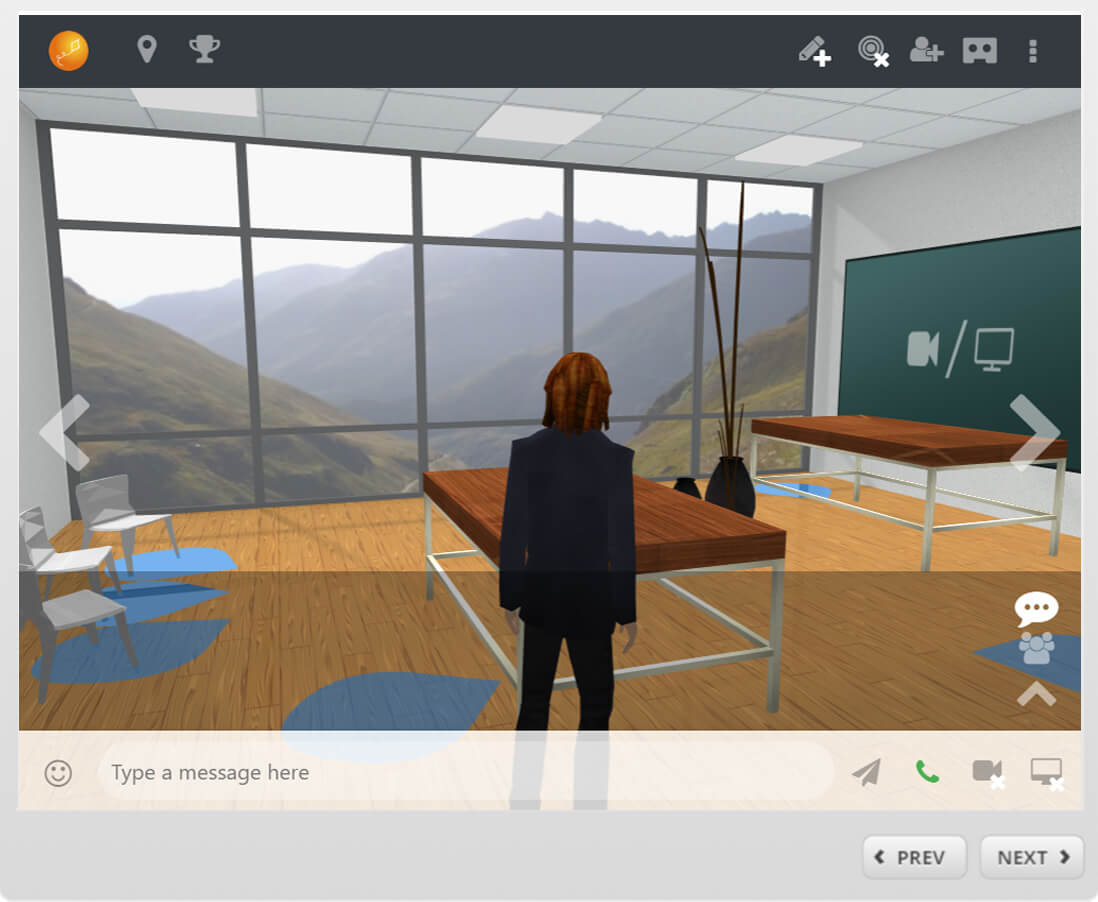 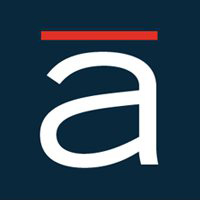 Integrating ChatMapper in SCORM environments through Articulate Storyline is incredibly straightforward. Thanks to the deep extensibility that both ChatMapper and Storyline have been developed for, JavaScript can act as a bridge and pass information from one to the other, and then to the SCORM environment.

This brief guide will take the user through the process of correctly setting up a ChatMapper scenario, integrating it in Articulate Storyline, and then reporting back to a SCORM environment with a sample project.

1.1. Setting up the project

Appendix I: Adding Scenario to an existing .story

Appendix II: Sending a score from Storyline to Scenario

Scenario creation in ChatMapper has been detailed in various places already, like the documentation, the introductory videos, and the helpdesk. For this reason, this guide will only cover the integration process to make ChatMapper communicate with Storyline and the SCORM environment.

1.1. Setting up the project

This should be set to true in the conversation we want to automatically start, and false everywhere else.

Since the aim of this guide is to also integrate with a SCORM environment (in this case SCORM Cloud), the need for score tracking presents itself. This is something done routinely with ChatMapper e-learning projects through variables.

In ChatMapper, create a new user variable (CTRL+SHIFT+U) with a name of your choosing and an initial value of 0. 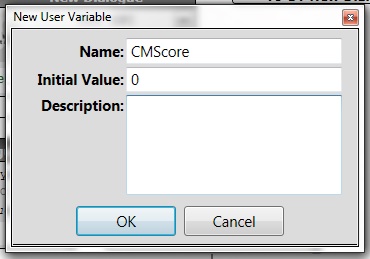 The same variable can also be created directly in code, by writing the following line in the Script Editor of the conversation’s first node.

The variable is thus declared and initialized (i.e. given an initial value), and can be then used during the scenario to record the learner’s progress, for instance by increasing it every time a correct answer is given. 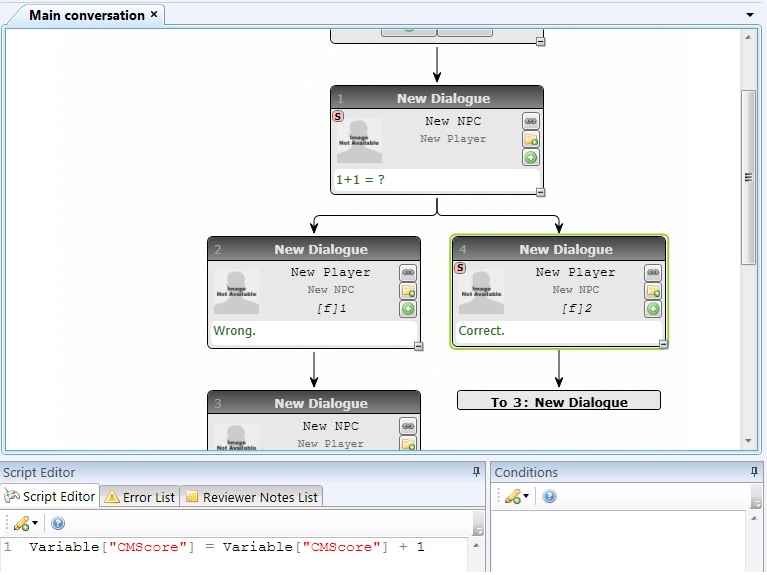 Fig 3. Note how the CMScore variable is incremented by one in the Script editor of the “correct answer” node.

In this case, we’re increasing the CMScore variable by 1 for each correct answer, which can be done like so:

Please keep in mind that any number of variables can be created for all sorts of purposes – this is just a proof of concept, and is for this reason kept simple.

There is one last step in ChatMapper, which is to communicate the scenario’s outcome to Storyline. This can be done as easily as anything else, by including the following two lines in the last node of the scenario:

Where Variable["CMScore"] will of course be the name of your variable, if it is different.

Now that the work on the scenario is done, it can be published. A series of video guides that go through the process step-by-step can be found here: https://learnbrite.com/vr-scenario-academy-scenario-authoring/. On a high level, this process consists of :

For deploying your first Scenario as a SCORM we recommend you use our pre-built Storyline template, which you can download from here. To add a Scenario to an existing Storyline project please see appendix I.

Now that the ChatMapper project is set up, open the provided template with Storyline. For the integration to work, it is required to add a variable to the Storyline project. This can be done by selecting a slide, then clicking on the “{x}” button on the top right of the “Triggers” panel. 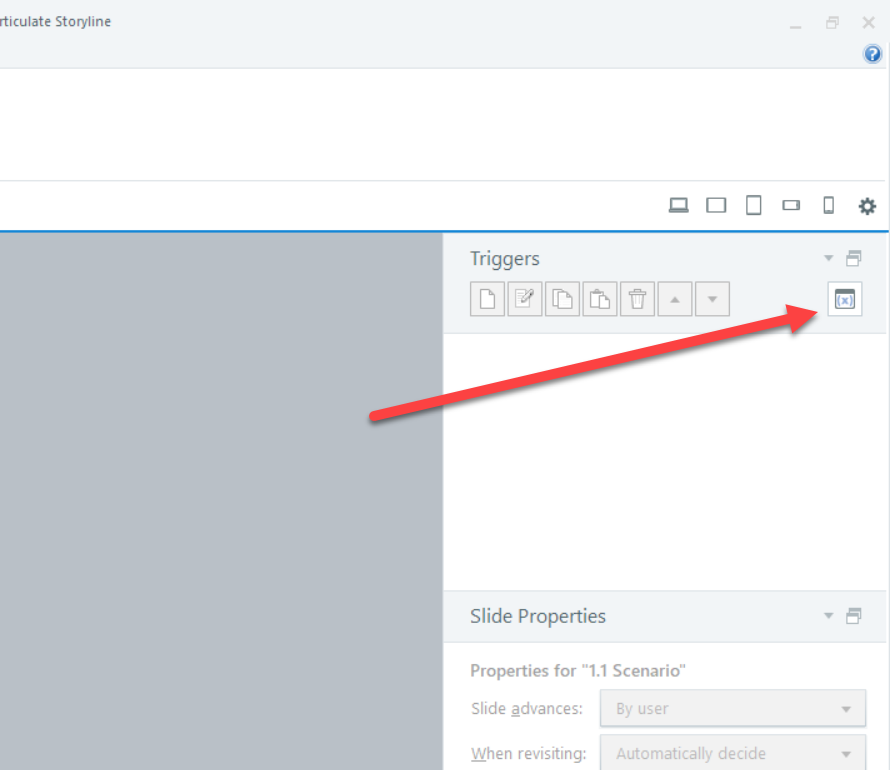 A new window will open, containing the list of variables. Adding a new one is as simple as clicking on the blue “+” button in the lower left corner 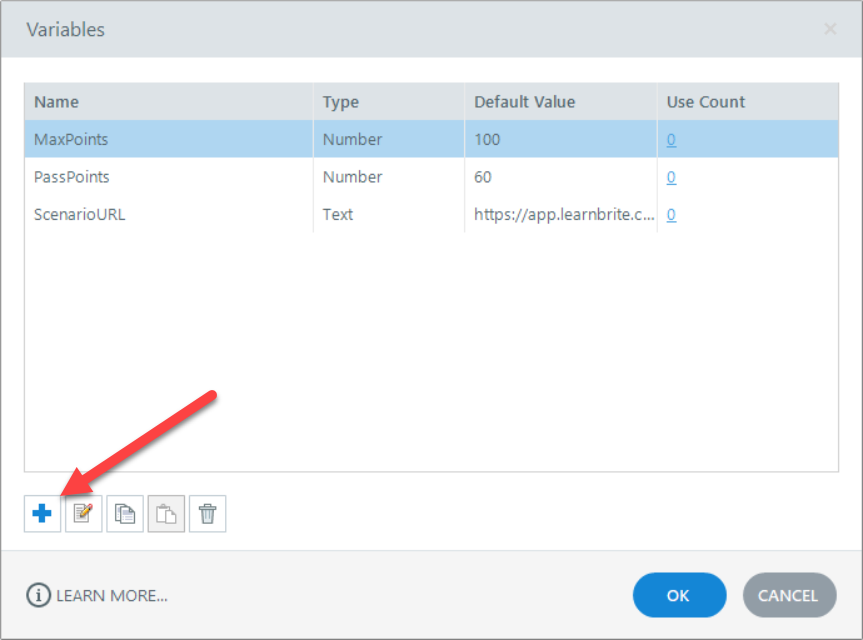 And then filling in the fields 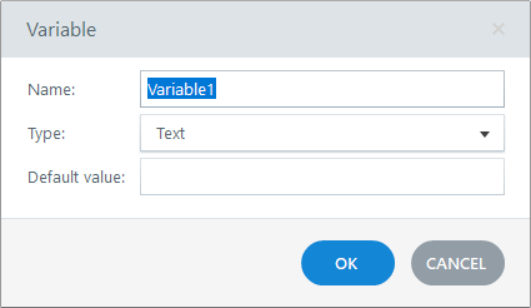 These are the variables to be added, alongside the form fields.

If you are going to keep your space up-to-date with our platform, a different URL is better suited for the task.

For worlds, the URL is similar. Note that in this case {SPACE_ID} is the ID of the space you want the user to “land” in.

For reference, here are the variables after they’ve been added:

When the score is submitted from Scenario, the Storyline wrapper will automatically pick up on it and submit it to the LMS.

The only thing left is to export the story so that it can be uploaded to the SCORM environment of choice. This can be done by going to the Home tab, and clicking on Publish on the far right of the bar.

This will open a new window, in which various fields and options can be selected. Here are the settings for the sample project. Note: you should export to SCORM 1.2. 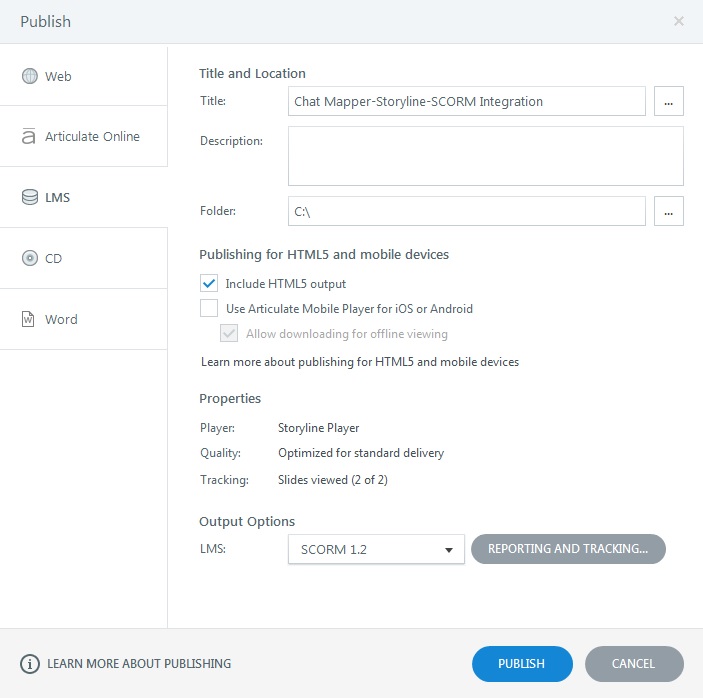 After this step is completed, be sure to click on the ZIP option in the new window that will pop up, and save that archive to a location you’ll remember – it is that archive that will be uploaded to the SCORM environment. 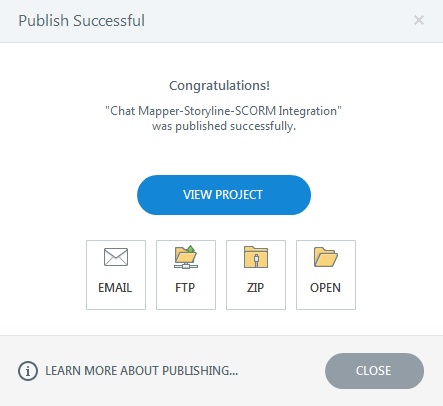 That’s it! The project is now ready to be uploaded to your SCORM server!

Appendix I: Adding Scenario to an existing .story

Scenario can be included within any Storyline project. To do so requires following 3 steps. 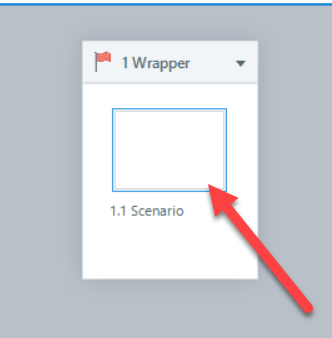 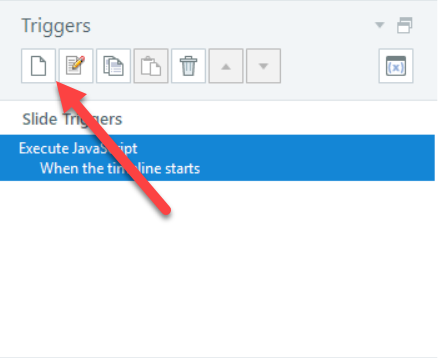 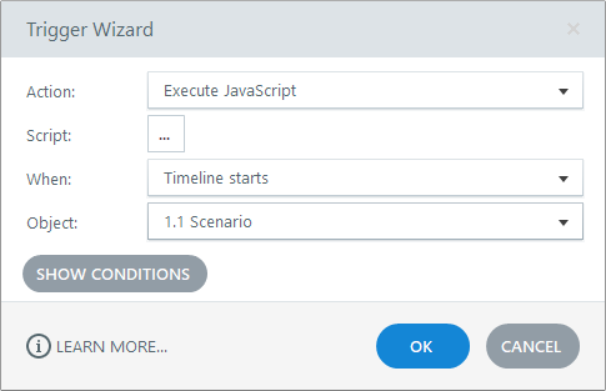 Fig. 13. Fields filled in to create the Scenario trigger

Appendix II: Sending a score from Storyline to Scenario

It is also possible to embed one or more Storyline modules within Scenario, and have Scenario receive a score from Storyline. This is useful when including multiple quizzes in a single room as mediaboards, to report back a unified score to the LMS.

First, each quiz will need a variable in which to keep track of the score itself. One can be created by following section 2.1 of this guide. We will call the example variable “ExampleScore”.

Then, to send the score from Storyline to Scenario, a button that will trigger the following Javascript is required:

That’s it! You can publish the project (see section 2.2) and when the user clicks on the button just created a message will be sent to Scenario with the score.

In ChatMapper, a listener is required to receive the score and trigger the appropriate actions. It is advisable to set this up in the first node of the first conversation the user goes through, to ensure the event listener is registered.

The code to add in the “Script editor” of that node follows; here is a handy image to show where the script editor is in relation to other ChatMapper interface elements (in the lower left). 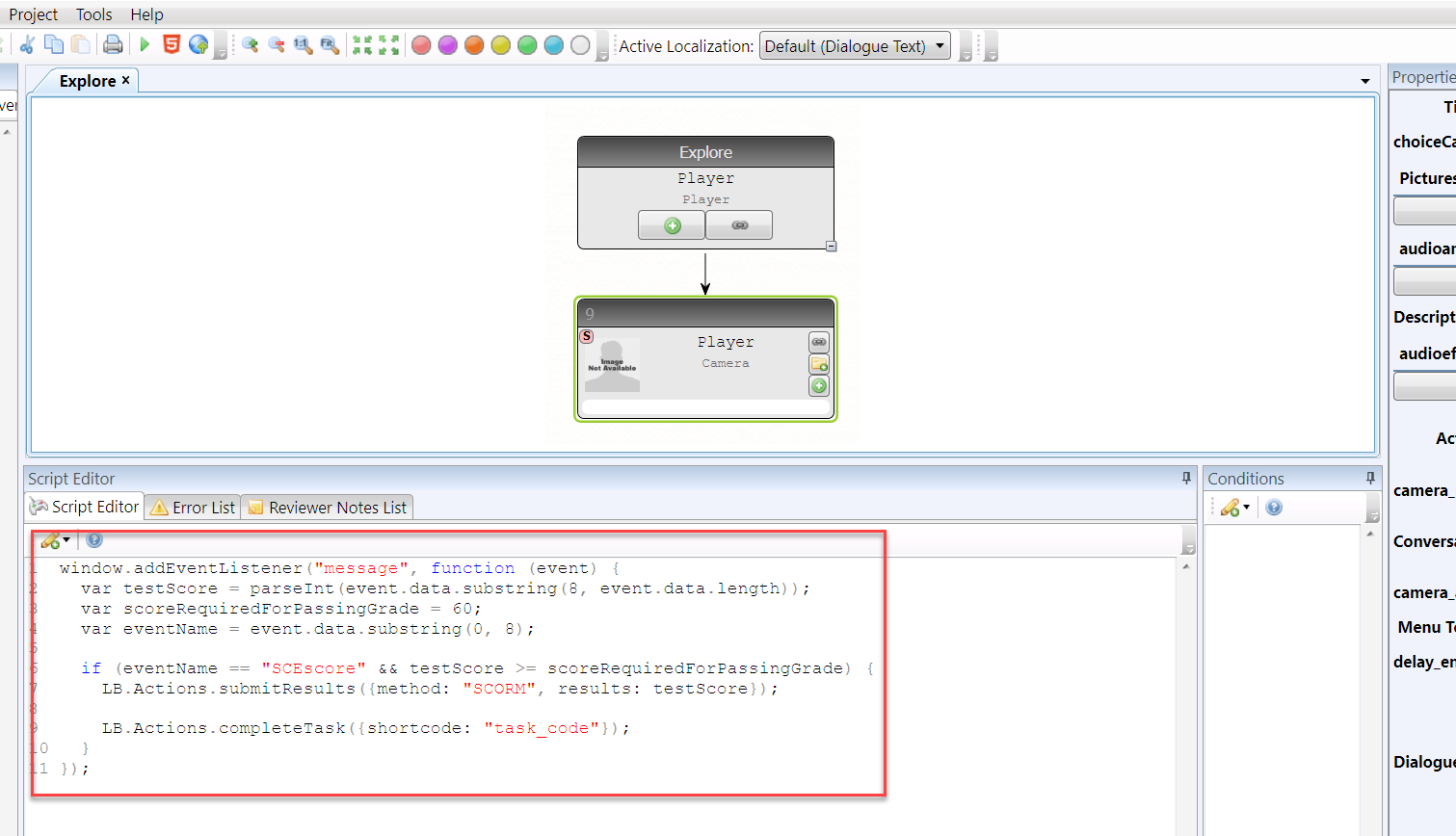 And here is the script

A few things to note about this snippet:

A note on scoring: if more than a single Storyline module is included in a Scenario, their score will need to be reduced to a single one (Scenario can only submit a single score to the LMS). It is therefore recommended to have a consistent scoring system (such as, for 5 different modules, having each of them contribute a maximum of 20 points to the score).

For the last part of the integration, some sort of trigger to show the Storyline module is required within a space – usually clicking or tapping on a mediaboard. Including it is quite straightforward: 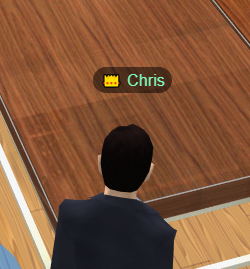 Fig. 16.Crown besides the avatar’s name 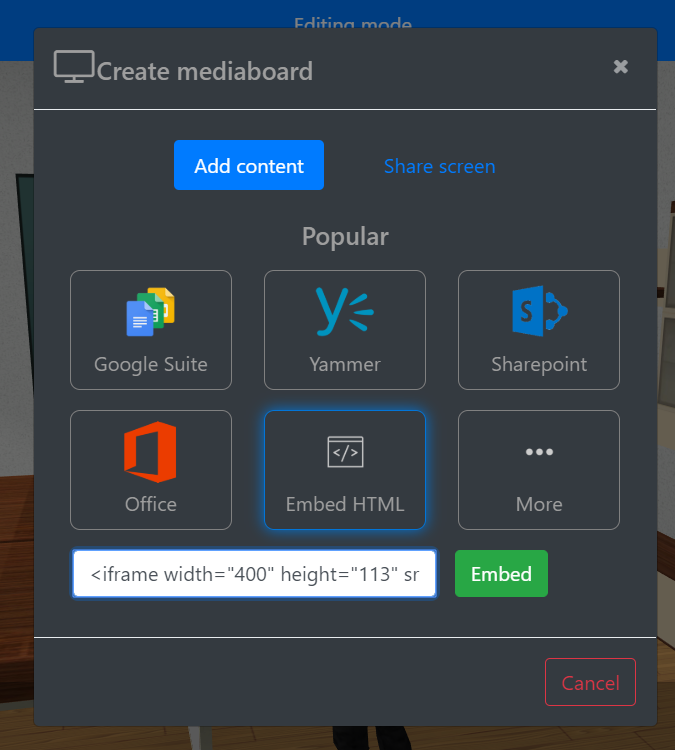 And that’s it – any Storyline module can be integrated within Scenario in the same way.

The easiest and quickest way to test that a score can be submitted by the platform to the chosen LMS is to create an object in the space, and call submitScore from it. 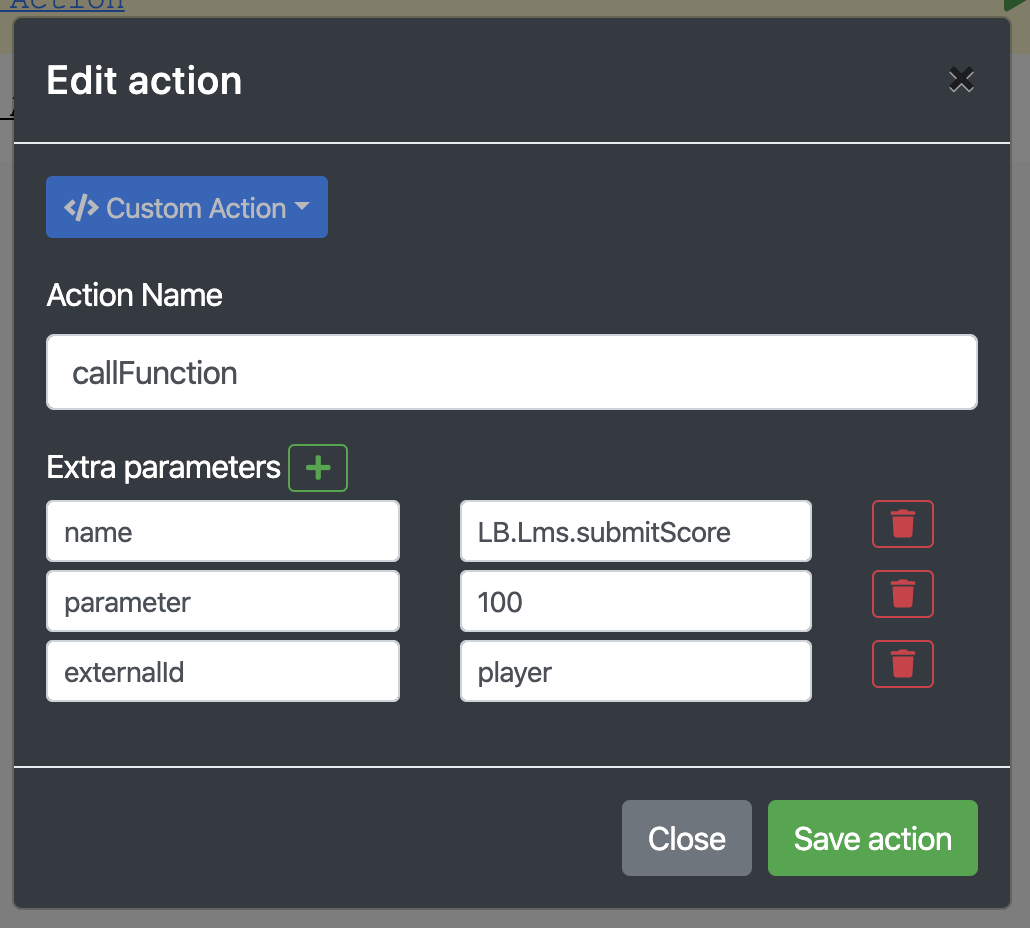 By clicking on the item now, a score of 100 will be submitted, and you can check that it’s reported correctly in your LMS of choice.