Different roles within the same world

Users with the Author role can create and manage properties (scenarios, spaces, and worlds) in Dashboard, which participants can then access.

Like Editors, Authors also have a crown👑 within the 3D environment, but they are not the same thing, as under a specific license there might be an infinite amount of Editors but only one Author. As this role is license-specific, it cannot currently be assigned within the Dashboard.

An Editor is a user who has been given access to all functionality within the 3D environment. They have access to Edit mode, allowing free modification of the 3D environment, as well as managing its participants/attendees, sending announcements, answering Q&As, etc.

Editors can be thought of as “administrators” of the 3D environment, and are therein identified with a crown icon.

The creator of a space (i.e. its Author) is an Editor by default. 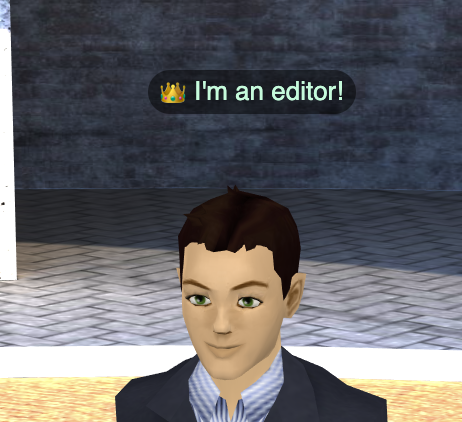 A Presenter is a user who has access to all functionality within the 3D environment, except for modifying the environment itself. They are marked with a computer icon.

A VIP has no special capabilities within the 3D environment, but they are marked by a blue diamond icon so as to differentiate them within the 3D environment. This is useful whenever a certain user or group of users needs to be marked but otherwise requires no special powers, e.g. support staff to help answer questions by attendees, reference people for a specific booth in an exhibition, and people of interest more in general such as honor guests.

In some parts of the interface a “Default” role might be mentioned, which indicates a normal user with no special powers or markings.

Roles are not platform-wide, but bound to a user in a specific space or world. The same user can therefore be a Presenter in one space, an editor in another, and a normal user in a third.

Aside from Authors, who are automatically Editors within any space or world they have created, roles are through the invites interface on the Dashboard, accessible by clicking on the “more” menu of a space/world and then on “Invites”. 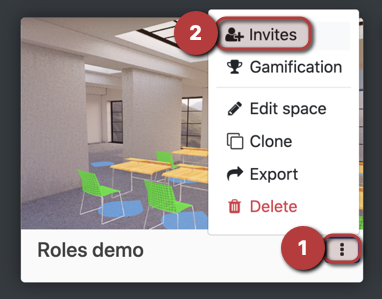 For a user that has not been invited yet, a role can be set by filling in the details in the interface (in red, below), selecting a role from the dropdown, and then clicking “Send”. 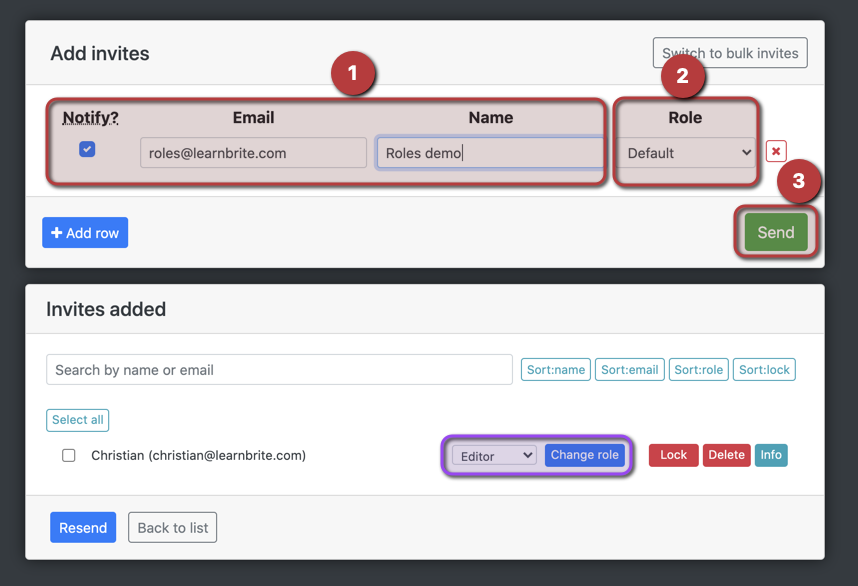 For users who have already been invited to the space, their assigned role can be changed by selecting the new one from the dropdown (in purple, above) and then clicking on “Change role”

A Default user role for all users accessing a space or world can be assigned through the settings of the property, specifically in the section:

The setting can then be changed by selecting the role from the dropdown, then clicking “Save” at the bottom.

Different roles within the same world

Let’s make an example with a world with three spaces, to which user Ronnie is invited.

WorldXYZ: Ronnie is invited as a VIP

└ Space1: Ronnie has no invite for this space

└ Space2: Ronnie is invited as a Presenter

The following will be true:

In all cases, a role assigned through an invite will override the default role set in the space’s/world’s settings.