Can I change the size of a zone trigger?

“On Zone Enter” is not firing

How can I nest audio zones?

Zone triggers are special areas that can be added to a 3D environment to execute certain commands when a user enters or exits them, including “audio zones”. Zone triggers are available from version 2.14 onward.

Can I change the size of a zone trigger?

Yes. Zone triggers are like other objects, and can be scaled either uniformly or only on one dimension (width, height, depth). For how to do so, see “Modifying items > Moving, rotating, and scaling objects” in the editing guide.

For a trigger to fire, the avatar needs to be completely enveloped in it. Did you just add the zone, and it’s flush with the floor? If so, you might need to position it a bit lower  – scaling up the zone vertically will also solve the issue. Since normally the floor acts as a barrier, Advanced Transform Controls are required, see “Modifying items > Moving, rotating, and scaling objects” in the editing guide.

“On Zone Enter” is not firing

When teleporting the user moves very fast but not instantaneously, so actions such as “teleportPlayerToSpotTag” might not work. In these cases, try adding a small delay to your action by using  "delay":0.5 . This will start the action in the “On Zone Enter” field half a second after the user enters the zone, which is enough time for the teleport to complete.

How can I nest audio zones?

This feature is not supported, audio zones should not be nested within one another.

A nested setup is useful for booths that are intended to have a booth-wide call as well as private calls within smaller areas of the booth, but an equivalent solution can be reached by using the same Zone Conference ID in multiple audio zones (see image below: zones 4 and 5 will have the same conference call) Zone triggers can be added from the edit menu 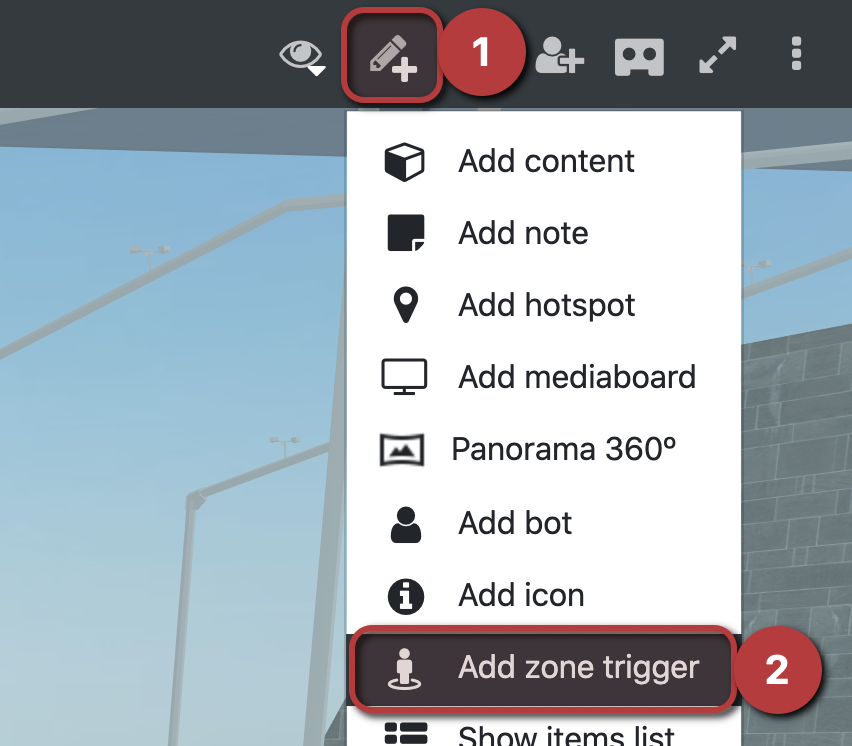 A yellow box will be created around your avatar: this is the area covered by the zone trigger. The box will not be visible outside of edit mode. To trigger certain Actions when the user enters or leaves the area covered by the zone, two fields are available within the object’s options, On Zone Enter and On Zone Leave. To access these options, enter Edit mode, then hover over the object; a small panel will appear with a cog on it, among other icons; click on the cog.

Any of the actions within the Actions guide can be used. The required format is the one called onclick one (see “Triggering Actions from Scenario onclick”), which looks like this:

It is not required to fill both fields. Either (or both) can be empty.

“Audio zones” are trigger zones separated from the general call available within the 3D environment. This means that it’s possible, for example, to have an exhibitor’s booth contain its own voice call, or to have a private area with a voice call that is only accessible with a certain passcode, etc.

To set up an audio zone, a few fields can be useful:

Zone Conference ID: any string of lowercase characters. Special characters and numbers are not allowed. This is the identifier used when separating the audio zone from the other calls, so two audio zones with the same Conference ID will share the call.

For information about Zone Access Code, please refer to the following section.

Zone Access Code is an option in the zone trigger settings: a “password” for the zone, which can be any text. When a user tries to enter a zone trigger protected by an Access Code they will be asked to provide it – they will only be able to enter the audio zone and trigger the enter/leave effects if they provide the correct code.

A user that enters a valid code will not be asked to enter it a second time (unless they reload the page).

It is possible to make one or more objects visible only when a user is within a trigger zone. This can be useful for a variety of reasons, from performance in really big exhibition spaces (by only showing certain items when the user is within the same booth, for example), to sectioning breakout rooms within a bigger space.

This requires using the same tag on both the trigger zone and the objects.

Write a keyword (only alphanumeric characters; spaces are not allowed) in the “Zone Visibility Tag” field.

In the options of each of the objects that should be visible only when a user is within the trigger zone, add the same tag (myTag, in our example). If a tag is already present, include a comma and then your own tag.

Instancing is a feature that reduces the number of visible avatars to improve browser performance and avoid avatar overcrowding. By default when a user steps into a zone they will remain in the instance assigned to them when they entered the space. This may mean that when they step into a zone they do not see everyone who is in the zone, that is if people are entering the zone from different space instances.

You can override this and force people to see each other’s avatars when they step into a zone by assigning an Instance ID to the zone.